Urupukapuka Island in The Bay of Islands – Day 347

Exploring the largest island in the Bay of Islands.

Today we are jumping on a ferry to Urupukapuka Island in the Bay of Islands. If you like this video and want more NZ bucket list inspiration then head over to our epic YouTube Channel where we’re doing 365 Days: 365 Activities in New Zealand!

Today we are exploring one of the 144 islands in the Bay of Islands.

At Pipi Patch very early morning we are making our way to Hukapuka?

Urupukapuka Island, which is a bird paradise…

And a beach paradise.

And a beach paradise and an island paradise, and a blue cod paradise…

And a Robin and Laura paradise.

As we walk from our accommodation from the Base Backpackers toward the Explore office we get to see an amazing sunrise across the beaches of Paihia. Once we pick up our tickets we are heading to the Paihia Wharf.

Today we are heading to Urupukapuka Island which is a bird sanctuary but we’re already seeing birds right on the wharf. There’s a tonne of shags which are amazing fishing birds and they are operating right here on the harbour cos fish are plentiful everywhere on the Bay of Islands.

As we are leaving the harbour of Paihia we are exploring a little bit the Explore boat, there is tonne of viewing platforms all around the boat giving us prime views of the Bay of Islands. it’s an awesome ship.

The really cool thing about the Explore ferry to Urupukapuka Island is that it’s not just a back and forth ferry, it’s more like a scenic trip. We’re actually slowing down for wildlife we’re stopping at a few islands along the way to drop other passengers off, it’s really awesome.

The trip between Paihia Wharf and the wharf on Urupukapuka Island takes around 40 minutes which gives us plenty of time to take loads of photos check out the amazing island scenery around us and there are 144 islands in the Bay of Islands so there’s actually a lot to check out and then we eventually arrive at the bay where we’re gonna get dropped off which is Otehei Bay.

Otehei Bay has a super long jetty leading to an archway with Maori carvings and paintings on it welcoming us to the island and already feels like we’re stepping onto an island paradise with long white sand beaches on either side of the jetty.

There is actually a lot you can do on Urupukapuka Island. They have a cafe and bar with a license, you can also hang out by the beach and there are obviously heaps of walks and you guys know us by now we make sure to hit the walking trails.

Almost instantly we hit a massive pohutukawa tree. This is a gigantic tree and the pohutukawa is actually the New Zealand Christmas tree cos it blossoms around Christmas time but the main attraction at this time of the year are all the native birds. We see heaps of birds hanging out on the tree.

The main walk around Urupukapuka Island is about 5 hours long but today we don’t really have time for that so we are just checking out the main highlights.

We’re checking out the highest point of the island, we’re checking out one of the most pristine beaches, and obviously we’re going to hang out in the native bush to check out the awesome wildlife it’s really doesn’t take us long to spot some native birds. After checking out a North Island robin, we are seeing a ton of tui birds. yes, that’s the same bird that you saw in the big pohutukawa tree. They are really fun birds with some really iconic calling calls. If you hear a robot in the forest usually that’s it. But shortly after that we check out the elusive silvereye.

Already we’ve spotted the next beach that we want to check out which is Otiao Bay and it’s a bit of a steep downhill to get there through the awesome kanuka and manuka trees and they are filled with loads of birds so we take a lot of time to check all those birds out.

Sure enough, we make it down to the beach where it’s covered in different seashells, white sand and it seems like the perfect place to have a picnic.

From Otiao Bay there are a lot more walks to explore. For instance you can go up the Akeake Peninsula which has some awesome views, there’s also some old pa sites which are basically where Maori villages used to be based.

But because we want to catch the 2.30 ferry back to Paihia, cos we want to get back to our accommodation and update BackpackerGuide.NZ for you guys, it’s not gonna update itself, we decide to return back along the track the way we came.

But the way back is filled with yet more birds and that’s cos Urupukapuka Island is a pest free island meaning that the introduced predators in New Zealand like the stoats and the rabbits that usually threaten native habitats, they have been completely eradicated from this island meaning that it is a bird haven.

Because this island is a pest-free island also we get to see a lot of birds that otherwise we wouldn’t get to see on the mainland of New Zealand in the Northland region which is the region we’re currently in now. For instance, the white heads right here this is rarely seen in New Zealand so we feel super super lucky to be watching them right now.

You’ll also notice that quite a few birds on Urupukapuka Island have these colours bands around their legs. And that’s the help the conservationists identify different birds also to see where to see where they come from and that helps with the whole conservation effort and boosts the population of these rare native birds.

As we are walking down the highest ridge of the island we get beautiful 360 degree views of the beautiful Bay of Islands but as soon as we hit the bush again it keeps on delivering – more birds. this one is a tomtit, it’s one of the smallest native birds that we get to see in the country.

This walk itself is actually a super easy walk to do if you have a really low level of fitness you will still enjoy that walk despite the fact that it’s a steep incline the path is quite wide, very well marked and you get plenty of time to actually do it so it’s definitely a hike worth considering when travelling in the Bay of Islands.

On top of that there are so many ferries going back and forth from the island you can stay as long or as little as you want on Urupukapuka. Plus, there is three campsites there so if you want to stay overnight, that’s an option too.

But there is no island life that is complete without an ice cream so while we are waiting for our next ferry we take the time to eat an awesome cornetto while watching some oystercatchers.

Oystercatchers are very common on New Zealand beaches. They are super territorial birds which are usually only found in pairs.

But that’s enough about birds for one day we are now ready to head back onto our boat and make our way back toward the little township of Paihia.

As we are boarding we are finding a seat sheltered inside cos the wind is gonna be really cold and we are taking the time to compare all the pictures that we have taken today. honestly, we took so many beautiful bird shots today that it actually is gonna be so helpful for us to update BackpackerGuide.NZ, I don’t think there is a single tour in New Zealand that we’ve taken more pictures of birds. It was absolutely brilliant and we kept some memories forever as we are heading back toward our Pipi Patch Hostel.

If you say it three times they come and bite you in the dark.

They come and bite you! 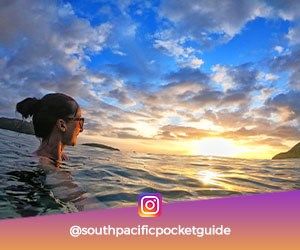